Delete and move files in a Git repository.

If you want to restructure a Git repository, you can usually do what you want with the following command:

Where X and Y could be either the name of a folder or a file. Examples:

Just as on Linux, you can rename a file with the mv command:

If you want to delete an entire directory and its subdirectories, try this:

To delete a folder from the repository, but keep it on your local machine, do this:

For instance, suppose you have accidentally committed something like a node_modules folder to the repo that you want to keep on your local drive, but remove from the repo. Do this:

The point being that you don't have to start a new repository if you want to change the way you have set up your directories. Just use git mv or git rm to delete files. 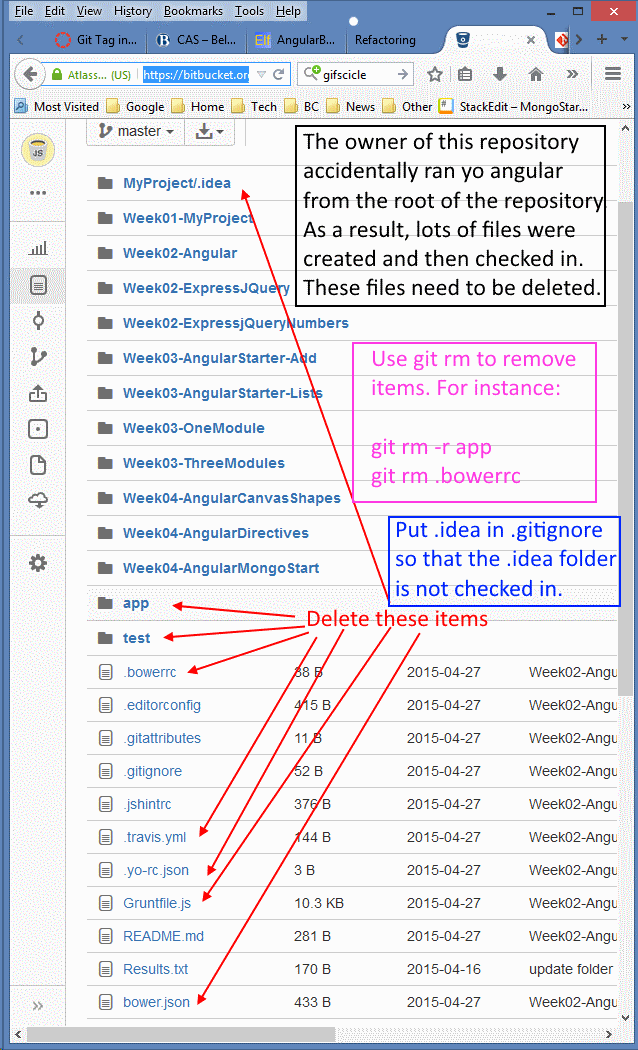 NOTE: There are two ways to permanently remove files or folders. Below you can find a discussion of how to do the delete using a tool called BFG.

What if you did not include node_modules in your .gitignore file? As a result of your mistake, your repository has a lot of deeply nested files in the directory called Week02-GetNumbers/node_modules. Your repository is many times bigger than it needs to be.

You should immediately update your .gitignore file in the root of your repository so that it includes node_modules.

The next step is to permanently remove the node_modules folders. This is an odd thing to do, because the whole purpose of Git is to keep track, for all time, of all changes that you make to a project. So even if you delete a file from a repository with git rm file_name or git rm -r node_modules, it should still be in the repository, but not in your working copy of the files. In other words, Git keeps track of the files so that you can recall them if you need them.

It is, however, possible to permanently remove a file or folder from a repository. Doing so is a rather drastic step. Here is the command you should run from the root of your repository:

More in-depth explanations can be found at these sites:

After you do this, you should push your repository like this:

Use that syntax just the one time. After you have pushed it once, you can resume pushing the repository with a simple git push command.

This drastic step breaks all other copies of the repository. On your end, you should therefore delete any copies of the repository from all your machines, and then re-clone it. (I think you can keep the one on which you issued this command and the push, but all other copies should be deleted.) Don't try to run the command on all copies. That won't work. Instead, delete them, and then re-clone them with this command:

NOTES: I've heard it said, but not tested that you can remove multiple copies of nested folders like this:

There is usually not a lot of difference between git mv and mv. Nevertheless, I suggest you use git mv and git rm when renaming or deleting folders that are already under Git control.

Though it is not always a problem, there are cases when using git mv rather than just mv is better able to preserve your history. Every time you commit, Git saves the state of your file. So it remembers what a file looked like the first time you committed it, and each subsequent time. If you use mv instead of git mv, then Git can think that you simply deleted one file and created a new file. Then your history won't be attached to the new file, and you won't be able to see what it looked like in the past. If you use git mv then your history for a file will be preserved.

Usually, however, Git can be smart about what happens when you use mv instead of git mv. In other words, it seems to me, and I am not certain about this, that it can usually figure out that a deleted file and a new file are so exactly similar that you must have done a rename, and so it preserves the file history. But I don't think it is good idea to count on this. Instead use git mv to be safe.

At first, you won't care much about the history of files since you won't really understand how to go back in time to previous versions. But over time, you will learn how to do this. Then you may find occasions when you are glad you preserved the whole history of a file. But frankly, this topic is complicated, and you should take what I say here with a grain of salt. All I can really assert is just that it is safer and easier to use git mv rather than mv.

Notice that the guy says they are the same, but the top comment on his reply is that git mv has a few safeties built in. The discussion goes on from there, but I don't want to try to recap it. It gets pretty technical pretty quickly.

Incremental: One Step at a Time

I see students get in trouble by renaming a lot of files, and especially entire folders, then not immediately committing their work. Sometimes they even delete or rename a whole project folder, and then recreate a new one with the same name:

This formula can lead to chaos. If you want to do something like this, I would do it like this:

And, depending on circumstances, sometimes try a git push and git pull after the above to make sure all is still okay.

Then: mkdir Week0X-SomeProject or the equivalent, which might be a copy operation or a run of CreateAllExpress etc.

The point being that one should work one step at a time. Don't make dozens of changes at once without seeing if you can successfully commit and possibly also push and pull.

The same is true in your code, don't make dozens of changes at once without checking to see if your tests still pass and your program runs. If you must make those changes very quickly because you are following along in class and have to move to the next step, then when you are done for the day, comment out nearly all the steps, leaving only the first one visible. Get it to work, then un-comment a bit more of your work, get it set up correctly, etc. Always one step at a time!

A tool called BFG can make permanently deleting files from a repository fairly easy. Do this if you accidentally committed something with a password in it, or some huge files or directories (node_modules, .metadata) that you don't want.

Now create a mirror of your repository in a new directory:

Run BFG on the mirror of your repository to, for instance, remove all node_modules folders:

Get rid of unneeded files:

To confirm that your work succeeded, clone the mirror:

Now you will have a regular repository and can explore it.

When you are convinced that all is good then go back to the mirrored repo and push it:

Your old repositories are now out of date and need to be cloned again. Don't just update your repository, clone it a second time:

In general, I find one of the gotchas with using Git is that deletion and renaming of files is best done with Git. So most of the time I'm working happily in an IDE, making lots of edits and creating new files. I do all this work in Eclipse, Webstorm or whatever IDE I am using without any problem. Life is good. Then I decide I want to rename a file, move it into a new directory, or delete it. At that point, I tend to switch to the command line, and give these commands with Git:

The first command deletes a file, the second renames it. Here is removing (entirely deleting) a directory and its contents (obviously a dangerous command):

Then I choose Alt-Tab to go back to my IDE, and generally it has found my changes already. If not, I focus the Project Manager and press F5 to refresh the view. As I say, this is perhaps less than ideal, but it is my general workflow when in a Git Repository.

The point is that Git will track the changes we make that way, so if we need to restore a deleted file, etc., we can do so later on. Just trust Git to keep all your changes.

Undo an Add in Git

Sometimes you do an add by mistake:

Suppose that you meant to do one of the adds, but not the other. You can fix it like this:

And this resets everything to before the add:

You can use git checkout to undelete things. For instance,

This should undelete a directory or file if you have not yet done a commit. If you have done the commit, then run git log so you can get the id of the commit you want to restore. Then try something like this:

Here are a few lines from a session that uses the git log command:

And here's how to get a file back to the third commit shown above: