This will be a a take home exam. You will have about a week to do it.

We will continue to build on our project that allows the user to call server side code to query the GitHub API, maps it to a format we like, and displays it to the user. We are getting closer to the point where we can use the API to explore our own and other's repositories with our custom web application.

The basic plan is this:

Here are the GitHub API's calls available for version 3.1.0. There might be a newer version by the time you read this. In most cases, you should use the new version if it is available.

I want you to be able to check the formating of your code with JSCS when I open it in WebStorm. If you have not done so already, install JSCS globally:

If you have not done so already, install JSCS globally:

Make sure JSCS is turned on in WebStorm. Go to Settings | Languages and Frameworks | JavaScript | Code Quality Tools | JSCS and make sure it is enabled.

Put this .jscsrc file in the root of your projects. Probably one for client and one for server:

Go to Setting | Editor | Code Style | JavaScript. On the Settings tab, in the first section, called Before Parentheses, set In Function Expression to false (unchecked). This means there should be no space after the word function.. Our code should look like this: function() {}. Not like this function () {}. Note the space after the word function in the second example.

JSCS should pass for your files. You can probably make this happen by choosing Code | Reformat in WebStorm, or by running the NPM package called js-beautify, which should be installed on your system in the global ~/npm/bin directory. If it is not installed, install it. But I do most of my formatting with WebStorm not js-beautify. 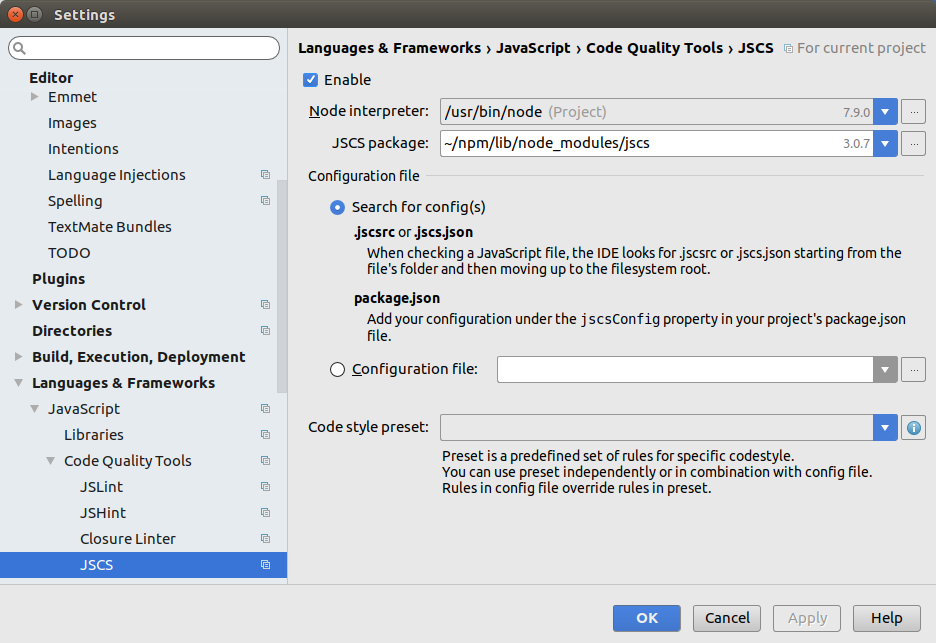 Remember that you have a Gruntfile.js in GitExplorer/server directory. This means you can run grunt jscs over the GitExplorer/server directory without difficulty. I found it only moderately painful to copy it over to GitExplorer/client and run it over the client code as well. There were, however, some Punctuator errors that I could not eliminate. I do not, however, get the same errors in WebStorm, perhaps because it is using a more recent copy of JSCS. To be sure you have the latest:

I can't get JSCS to accept our arrow functions which we use for binding this. In ElfLogger, for instance, I write this:

This is well formed, if experimental, ES6 syntax. If I remove the semi-colon, then I get a missing semicolon complaint from JSCS. If I add the semicolon, then I get this error, which I usually see at the very top of my file:

NOTE: When I got this error, the editor did not usually point right at the source of the problem. Instead, for me, it was often pointing at the first import statement at the top of the file. Eventually, I realized the problem was not the import statement, but the arrow functions. I found this to be quite confusing, and it took me several tries before I sorted it out. Once I removed the arrow function, however, the other JSCS errors were easier to find, and WebStorm pointed me at the place in the file where the error occurred.

The solution is to go back to the old syntax for binding this. In the constructor, I write the following:

Now I can switch to the traditional method declaration syntax, and yet still have this properly bound. That is, this will be valid in the setQuiet method. The problem is not unique to this object, and you may need to make similar changes in multiple place to fix the problem.

For an example, look here:

Really sorry about the arrow functions. It's easy to fix our code, easy to switch to the explicit bind syntax, but I'm sad to see the arrow functions go. I liked them, and this seems like a trivial reason to give them up. But I mentioned earlier that there is a real debate about whether to include them or not in the final ES6. The silver lining is that it is good to learn more about bind.

This appears to be more than one way to achieve the goal I was looking for in the extra section. I'll give you both options and let you choose one or the other or both or what have you.

One option would involve letting git-convert curl the data, then generate the field definitions, then copy them into the client directory. That's a simple yet still very useful solution.

If you go this route, consider writing a Bash script:

You could possibly integrate your bash script into your package.json file as a task that was run before each start of your application. This post seems to go into some depth on pre and post scripts in package.json:

He points to more documentation here:

An alternative solution for the Extra credit might look like this. Right now we import the field definitions:

I was thinking that instead of importing them, we generate them on the fly. We would use modified version of git-convert to generate the definitions. But in this case git-convert would be integrated into our code. We would simply run git-convert against the code we get back from GitHub when we call fetch. I like this solution because it is cool, but is probably not as efficient as the above version, since the code generation would be done at run time.

This solution would perhaps make it impossible to have a default set of data: we wouldn't know the structure of the fields until we queried the server for the JSON. On the other hand, the default data we display was perhaps more of a learning exercise than anything we want in a shipping product.

It's extra credit, so I leave it up to you how you solve these problems. Consider using a branch when making the changes, so that you can always go back easily to the code you had before you tried any major surgery.

Git add, commit and push. Create a branch called midterm and then add a tag that you push to the origin. The branch and tag should both have the word midterm in their very short tag/commit message. If there is any doubt as to which folder and branch your midterm is in, be sure to spell it out. For instance, I would like to see something like this, even if you are using the defaults:

You can update the midterm branch at any time until the actual due date for the assignment. Even then, I would probably prefer a late update to a broken program.

By definition, enzyme shallow works with only one component at a time. When we use shallow, it is therefore not possible to check if a button click is working correctly since that involves the interaction of two components.

However, even when we use shallow, an onClick function can be created within a button test to validate that the button responds to clicks. We implement the onClick function as a callback, and then confirm that when we click the button the callback is executed.

Here is an example:

Thanks to Andrew Wilson for inspiring this tip!

This works even if the input control has a number of other attributes other than value.

Also, notice the menu the tests give you. Note the p option for filtering files. Suppose one of your test files is called Foo.test.js and one is called Bar.test.js. Press p and enter Foo. Only Foo.test.js will run:

Even though I had several tests in my tests folder, only the one that had Foo in its name was run.