We will learn a bit about React props by continuing to expand the rest-basics, ReactBasics and ReactMicroServices programs. We will try to understand properties, and to see how they can be passed from one component to another.

In this assignment we are trying to create something that looks a bit, but not very much, like this: 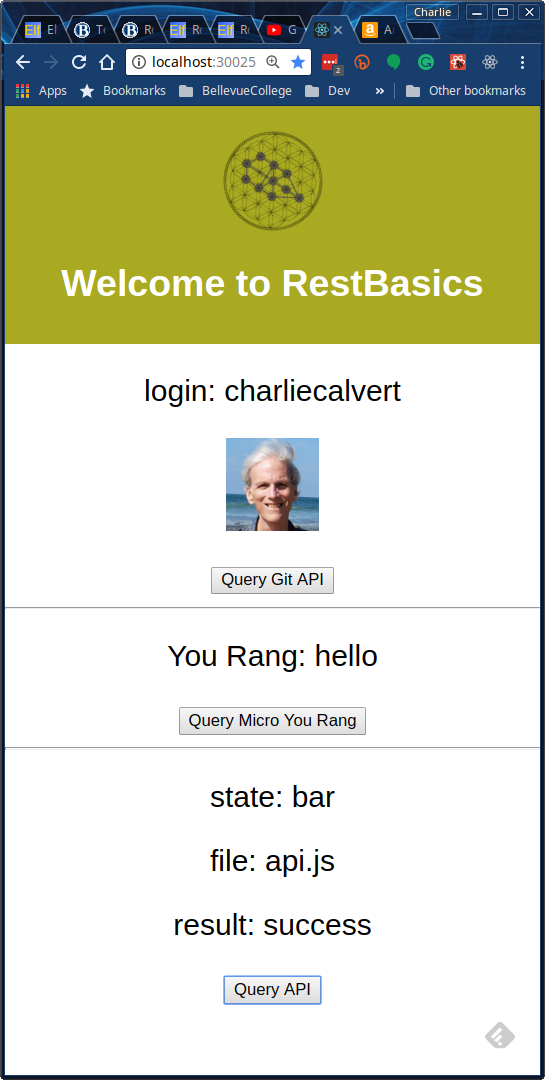 At the top we see some data from our GitHub account. Yours will, of course, differ from what I see in my app. Next we see a call to one or more Micro Servers. Finally, we see the original data retrieved from our /test-routes/foo route developed in Rest Basics.

There are a few terms we need to know here:

The Github API is a Web API. It allows us to make calls across a network, but spares us the arcane details found in SOAP and WSDL.

Since we are often working on a single project that has multiple phases, let's create a Git tag marking our current status. If you already have a properly formatted tag in your repository, then use elf-tagger.

If you don't have any tags in your repository yet, then do this to create a properly formatted tag:

The first command creates a tag that has a message associated with it. The message works much like the message in a commit.

The second command pushes the tag from your local machine to the cloud.

The last command lists your tags and their message on one line. If you have only a single tag, it is not particularly useful, but once you have multiple tags you will see how helpful this can be. Increase the value of the number after -n? to see more information about your tag. You can read about tags here:

You might create multiple tags for an assignment, but one of the tags should be made just after you commit and push the code you want me to see. Then turn in that tag with the assignment.

After creating this first tag, we should be able to use elf-tagger for the rest of our tags.

If you have not already done so, create a new branch called Week04. You must put your homework for week four in this branch and merge you completed code back into master! (You can do it!)

Write some code, commit your work. Push it:

Let's change the revolving image found at the top of our default create-react-app program perhaps called something like Week02-RestBasics. I found images here:

It's easy to swap in one of the these images for the default spinning "atomic logo". For instance, employ wget like this to help you get the job done:

Now modify the import statement in App.js that loads your logo. You should load the image you downloaded instead. Note that I have picked an SVG file which should both be small and should load quickly. If a file name from the web is long, I sometimes rename it to something easier to read such as tree-of-life.svg.

Depending on your tastes and the image you choose to load, you may also want to edit the background-color for the .App-header in App.css.

In Google, turn to the images page. Select tools, and select Labeled for non-commercial reuse or something similar.

Also, let's put our images and CSS in their own folders:

You will need to make some changes to your code after doing this. In fact, you may have to play with these paths several times over the course of this assignment.

Right now, we are doing, or in the process of doing, two things in App.js. We are calling, with fetch, our server and microservices with the endpoints defined in the ReactMicroServices assignment.

Each module will contain

We have not implemented the server side code of the GitUser call, but we will do so later in this assignment. So we might as well get started.

NOTE: I am realizing that I have erred in using the term stateless component. I should have been calling them function components. Some details are here:

We have not yet covered passing props to stateless components, so I'll implement Qux for you, then let you do the other ones.

Here is how to define Qux without passing state:

It is short and sweet and also lightweight because it does not have the overhead of a class. That is why people like stateless components.

Unfortunately, it does not compile because this.queryServer is not defined. Even though we are not yet passing in queryServer as prop, let's right the code that would handle the paramenter if it were passed in:

Notice that we now pass in a paramenter to our function. In our JSX, we call the paramenter directly, rather than qualifying it with this..

Now go back in components/App.js and pass in queryServer as props. This part of the syntax is unchanged from similar examples you saw in Isit320:

The point is that we have replaced the Qux button originally declared in App.js with a call to the Qux stateless component that we just created. Or, to put it differently, we have moved the button from App.js to Qux.js. WebStorm will probably import Qux.js for you, but if it does not, manually add the code near the top of components/App.js.

Take a moment to make sure you understand how we use target.dataset to tell queryServer which button was called and which URL to use. If you don't understand, ask me in class or discuss the matter in the discuission area. It is important to understand this part of modern HTML.

Now go ahead and refactor all the components out of App.js. When you are done, there should be no button declarations in App.js.

Note that in your implementation of GitUser.js you will need to add a DIV to your stateless function to wrap its two buttons.

When you are done, you should have at least the following in the components folder: 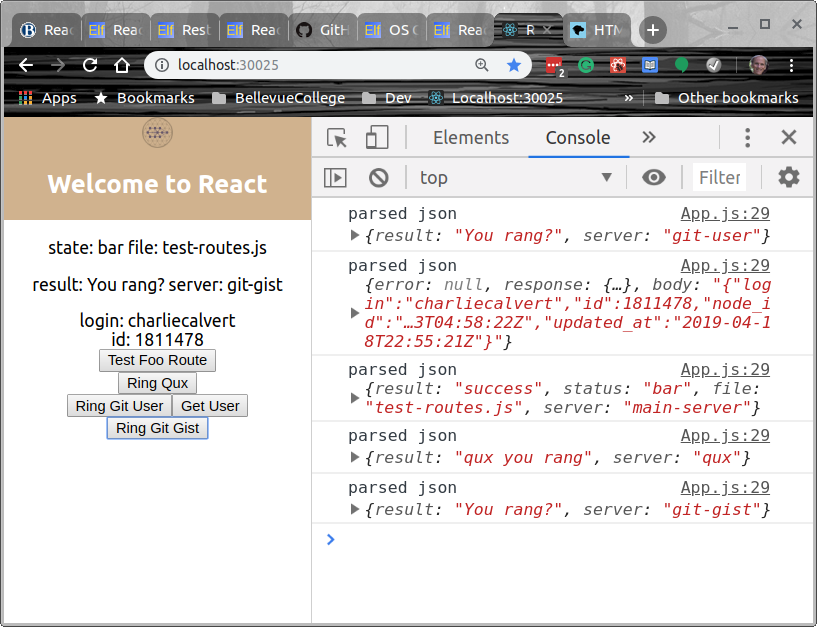 Here you can see in the console window the proper responses to clicks on the various buttons.

You can also use PropTypes to get better warnings at runtime for props type mismatches.

First install the prop-types package in the client directory:

Then add the tool to your Qux component:

Here we have declared queryServer to be of type function. If we passed in something that was not a function, or if declared that queryServer were of some other type such as string, then we would get an exception at runtime.

Do something similar for all your modules.

Install request: npm install --save request in the server directory and in any other project that uses request. (For now, I think that is only server, but if you require (import) it elsewhere, then you will need to install it.)

In git-user/routes/index.js add the following method. If you have GitHub account, use yours, not mine:

And then use it in App.js:

Once you have that working, refactor a second time and put appInit in its own file. I called mine app-init.js, and for now, mine happens to be in the src directory, but ultimately we might want to refactor and move it elsewhere. Export the object literal.

You will now need to import this data into client/src/index.js and into your tests:

HINT: When writing your tests, don't forget that App now has an attribute/parameter passed to it as props. So you will need to tweak the code to have it do more or less what it does on client/src/index.js. I'm being intentionally vague, as I want you to figure our the rest yourself.

This section is optional and perhaps you should just skip it, as I would like to replace it at some point. Here are three steps to a poor man's logger:

Create a directory called src/tests and put all your tests in it. Refactor your tests into modules that might look a little like this:

All we need now is simply to get the basic "I can load the module" test to work. In my case, at least, only App.js needed to be passed props to get the test to pass. Later, we will need to pass props to these other components, but you should not need to pass anything in at this point. More specifically, we are not yet at the point where we need to pass in queryServer.

In the images shown below, some of details may be slightly askew, but nevertheless these screenshots should help you get a sense of what I'm looking for and what your directory structure might look like. 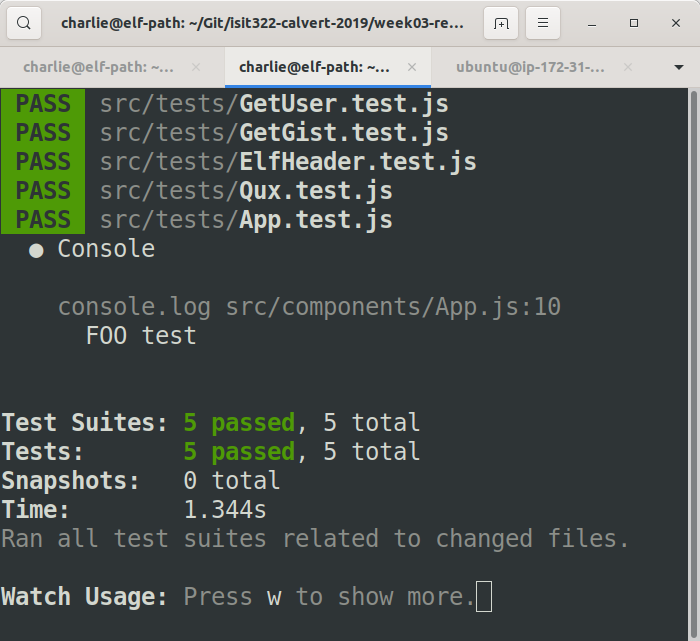 Simple components like Qux have a button on them. When we click the button, a method is called. So all we want to do is test if the method we pass in as props is called when the button is clicked.

The following code works for both React Class and React Function Components:

Here we are using jest.fn() to create a mock function that knows whether or not it has been called. We use the mockImplementation method to give the function a random implementation.

All we want to know in our test is whether we can pass in a function to Qux and detect if it is called when the button in Qux is clicked. In our test, we don't really care what the function does. More particularly, we don't want the button click to make a call to our microservice because that would mean we had to get the microservice running before the test could be run. That is too much work. If we had to do that each time we wanted to run our tests, then we wouldn't run our tests. (There are other ways to test the microservice, but here we just want to test Qux.)

Just to be clear, lets review the main points. The jest.fn() method creates mock function, a "fake" function whose primary function is detect whether or not it has been called. We also give it an implementation, but that is not necessary. Our test is to simulate a button click and then check whether or not our mock function was called.

If we don't want a mockImplementation, the call could be as simple as this:

This is very clean, but I think it is nicer, especially for beginners, if the jest function actually does something, as it does in the first example.

Below you will see two other ways to do what is shown above. I include them as they can be helpful in other scenarios. But in this case, the code above is all we need.

This worked for React Class Components:

In the above we are using two Jest tools we have not seen much before:

This worked for either a React Function Component or a React Class Component:

First commit and push. Then tag and push. Designate the directory and branch in your repo where you did your work:

This is an outdated section, and no longer necessary. More specifically, you should already have bower_components in your .gitignore if you don't, put it there. I am, however, keeping this section for now in case some specific person needs to do this. However, most students can just ignore this entire section.

Unless you are sure you mean to do it. make sure that components is not listed in your .gitignore files.

Once again, be sure that you remove components from .gitignore

Here is server/views/layout.jade after this change with bower-components instead of components: