Use Rest with React and Concurrently. There are two applications joined by a proxy:

Both of these slide decks contain relevant information that might be useful when working through this assignment:

Your assignment is to understand how and why a request from a client is processed and routed by your server. This is one of the key subjects that we must understand. Eventually, we must perform a complete meld with HTTP requests and how they are routed on a server.

Merge your current work from weeks 1 and 2 into master. Fix any conflicts that might arise.

Create a branch called week03 based on your work in master.

We are going to have two projects in this assignment, so lets set up a directory for them.

Create a directory called week03-rest-basics in your week03 branch by navigating to the root of your repository and entering the following commands:

Make sure you have the latest copy of JsObjects and that your global npm packages are up to date:

In the RestBasics directory, run the following command:

You have now created a fully functional, node based, express server that can handle HTTP requests.

NOTE: You can usually return to the directory you were in previously by typing cd -.

The following diagram provides us with some nomenclature.

Some of the terms shown in this diagram are esoteric, obscure, and infrequently used. The key things you need to be able to recognize are the:

URLs and URNs are both URIs. Very loosely speaking, the technical difference looks something like this:

Don't confuse a path with a URN. For instance, the path the-great-gatsby in the following URL is not a URN:

An HTTP requests consists of URL like the one shown above:

We use a URL like this to send requests from a client to a server. If we want to tell our server to do something, we send it a request in the form a URL.

Let's write code that will handle a request such as the one defined above. We will put our custom server code in its own file.

In the routes folder create a file called test-routes.js:

As explained above, this method is designed to be called whenever the user enters, or sends via HTTP, the following URL:

To get started, we can describe how to link this new file to our express project. This involves using two commands:

Remember, if we don't ever set up any middleware for handling a request, then we never see the request and it will probably be, for all intents and purposes, ignored by our server.

Now set the port, in bin/www, to 30026. Two ways to do that are explained in our Concurrently assignment.

We are going to run the client on port 30025, so we are setting the port for the server to some other number. I've chosen 30026 in the hopes that it will be easy to remember.

Take a moment to understand what we have done.

For instance, the following HTTP request would call the foo method in our new file:

Here is how to break it down:

Notice that we have made two similar calls:

The router object is designed to help you set up a dedicated portion of your server for handling a particular kind of URI. For instance, all URI's that begin begin /test-routes are handled in the file called routes/test-routes.js.

If you want, go ahead and start your new server:

NOTE: Most of the time, just typing npm start is sufficient to start your project. However, if you get an error, the first thing to check is that all the packages your app needs are properly installed. To do this, type npm install (npm i) and then try npm start again.

Once your app has started without errors, enter the following URL in the address bar of your browser:

You should see very plain output that looks a bit like this:

Our server is running in your bash shell. Because of the way we started it, it completely takes up the shell making it unusable for any other purpose:

NODE: For those who know about such things, I'll add that an express server is probably not a candidate to be run in the background with the & symbol. Later on we will see other ways to solve this problem, but for now, let's just start two bash terminal tabs, one for the server, and one for the client.

Navigate to the second terminal tab, the one you are not using. From the root of the week03-rest-basics directory, create your client:

This uses a global NPM package found in ~/npm/bin to create a new react based client application for use in the browser. It uses ES6 syntax, and has many fancy features that we will explore over time. create-react-app is built by Facebook, the same people who create React.

NOTE: At the time of this writing, April 2019, create-react-app uses an older version of Jest that has a lot of vulnerabilities. This is scheduled to be fixed in version 3.0 of create-react-app. Type create-react-app -- version to check the version number, and type ncu -g to see if an update is available.

It can be easier to use create-rect-app than to build a program by hand as we did in our ReactBasics assignment. The output from create-react-app is, however, much more feature rich and much more complex. Also, it commits you to a react based style of development quite different from traditional ES5 development that uses jQuery, Angular or some other library. In this course, we are going to spend considerable time working with older applications that have subsystems built with React and ES6.

Because our application uses ES6 (ES2015), you want to tell WebStorm to expect modern JavaScript syntax. In particular, set the File | Settings | Languages and Frameworks | JavaScript to React JSX. 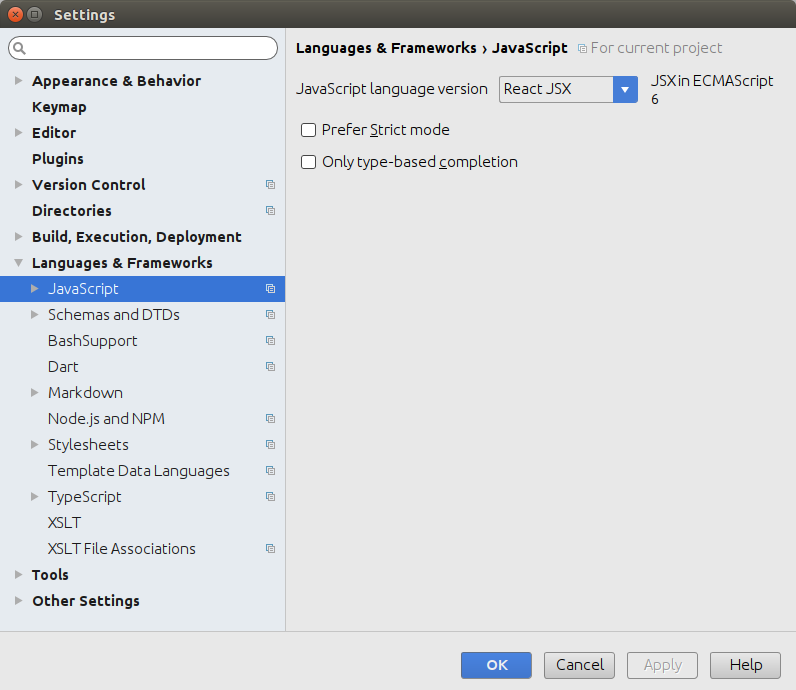 Also set up ESLint support at File | Settings | Languages and Frameworks | JavaScript | Code Quality Tools | ESLint. Set the ESLint package to ~/npm/lib/node_modules/eslint. If that doesn't work, try "Detect package from configuration". You should be able to pick either option from drop down. 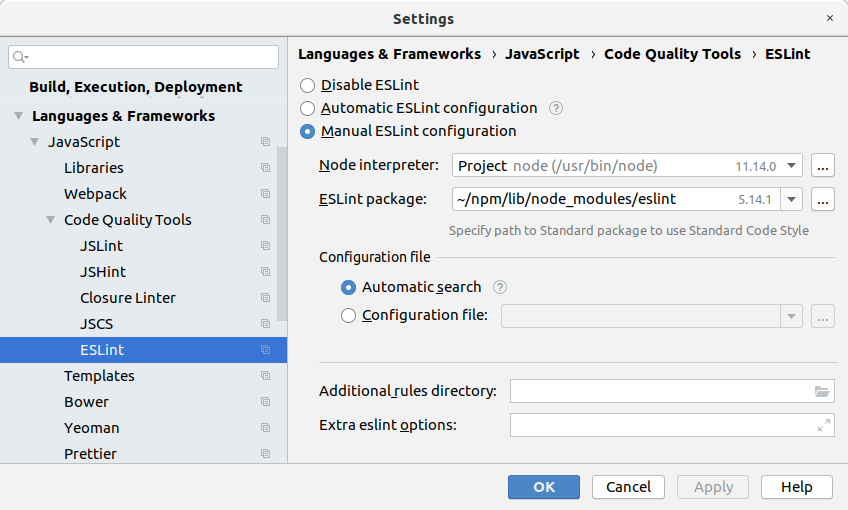 Then reinstall: npm i

Open up App.css and change the logo height to 10vmin or smaller:

Set the min-height for the App-header to some small value like 15vh. Or build your own header. Be creative and do something unique. All I ask is that we can actually see your button when we open the app.

To learn about viewport units (vmin and vh), run this search:

In your client application, in package.json, just before the dependencies section, add this:

This tells our react app to forward requests for REST calls to our Express Server that is running on port 30026. See code in scripts/start.js for more details.

NOTE: Experiences has taught me that this is one of the most frequently neglected steps. Don't omit it! It is very important.

We will use the native JavaScript call fetch in lieu of the jQuery calls named $.ajax or $.getJSON. The fetch call is part of the ES6 standard, and is now finalized.

Here is the heart of our application, which we construct in client/src/App.js:

The key call here is to fetch, found in the method named queryServer. featch uses JavaScript promises. The promise uses two .then methods. If the call could not be made because of a problem on the client side, then the first .then method throws an exception. This first call to the .then method is there to check if the HTTP call was able to send a request to the server;

It will succeed even if the server reported an error such as 404 Not found or 500 Internal Server error. In other words, the first .then can succeed even if the server throws a 404 or 500 error. However, response.ok will be set to set false, and status and statusText will contain the error number and string describing the error. Thus one could write in the first then method:

If you did this, the second then would never be called.

All errors should end up in the .catch block.

Let me try to summarize that:

NOTE: fetch can be used for retrieving a multitude of objects, not just JSON. But in our course, we usually use it retrieve JSON, so I'm emphasizing that functionality.

Assuming you have already run (npm install) the call to start the client could not be simpler:

Your application will magically open in the browser. Updates should also appear as you make them in your code.

NOTE: Remember, we typically need to run npm install only once per project on a particular machine. We run npm start every time we want to start or restart the application. We can use Ctrl-C to shut down either the client or the server.

Make sure you set up the project the same way we did in the Concurrently assignment. We should be able to issue a single command and start both projects.

Though I don't recommend it, and in fact recommend that you don't do it, if you are terminally curious, you can run this command in the root of your client application:

The command exposes the inner workings of create_react_app. In particular, it creates a scripts directory and modifies package.json. Look at package.json to see the relationship between the two. Rather than do this with a project that you might want to keep, I would do create a temporary project, and try this command there. It's interesting to learn more about create-react-app.

Don't do this in this application because everything is handled for us by the code auto-generated by create-react-app. But in a manual ReactBasics type of project, I believe you also need to add code to webpack.config.js in the entry property:

This is optional, but if you want to run on Cloud9 you might find these notes helpful.

Also, when on Cloud 9 be sure bower is installed:

Then make sure you have processed both package.json and bower.json:

Then run the application:

Then Preview | Preview running application from the menu items near the top right of the Cloud 9 IDE.

Putting Server Side Code in a Separate File

We don't do this anymore in this assignment. But sometimes, we want to move code out of routes/index.js into its own file. For instance, if had several methods in index.js for testing our ability to call a route, we might move that code into a file called routes/test-routes.js.

To set up our middleware for handling requests to testRoutes from the server we take two simple steps. In app.js around lines 10 and 28, we write the following:

The first line just allows us to gain access to our new file: it links it into our project. The second line states what we want to do: we want to use the code in our file as middleware. We are telling Express that if there is a request from the server that ends with /test-routes, then it should be passed to our code in ./routes/test-routes.js.