The goal of this assignment is to display and test a complete set of numbers from 1 to 9, each of which has state and can be set with a button click.

Since we are often working on a single project that has multiple phases, I suggest creating a git tag marking your current status:

The first command creates a tag that has a message associated with it. The message works much like the message in a commit.

The second command pushes the tag from your local machine to the cloud.

The last command lists your tags and their message on one line. If you have only a single tag, it is not particularly useful, but once you have multiple tags you will see how helpful this can be. Increase the value of the number after -n? to see more information about your tag. You can read about tags here:

We left things, I believe in this state: 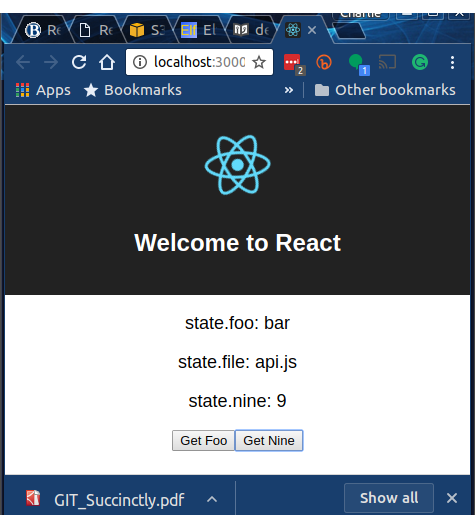 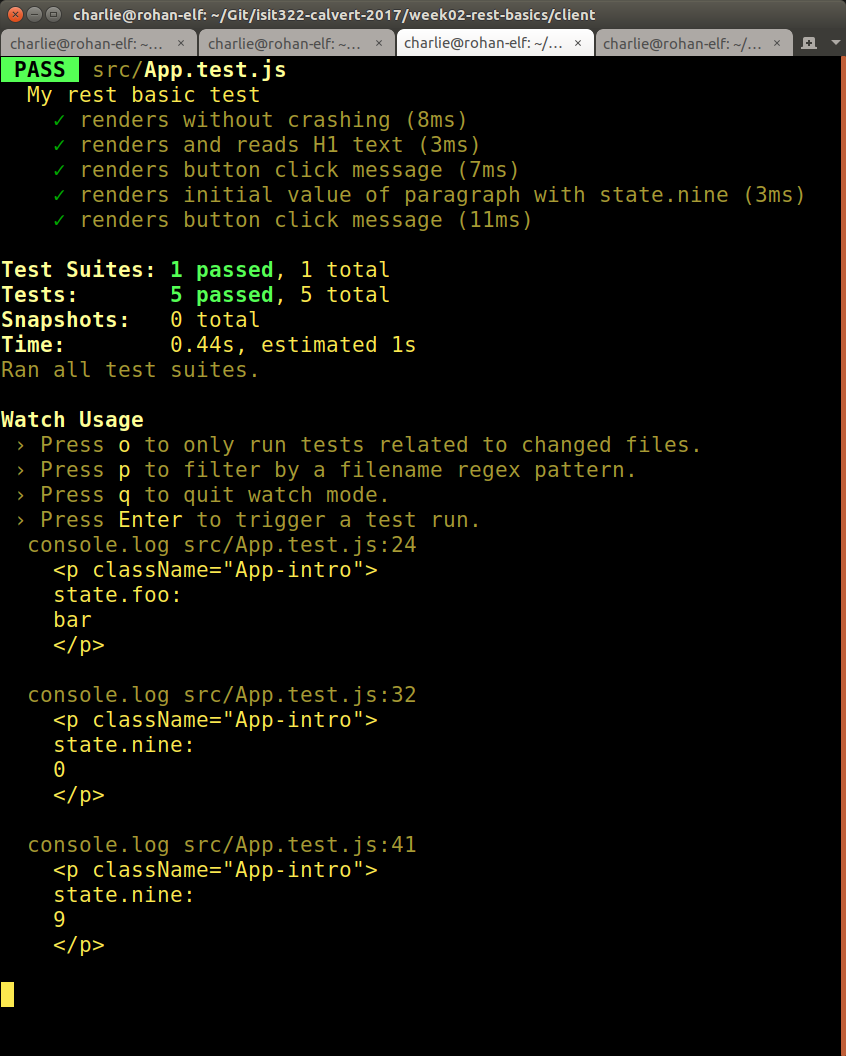 GetFoo is the one with the rest call. We are mocking that rest call for our tests. Here is the mocked mock object that we were using by the end of class Thursday:

I'll develop that further, but this is a start.

The correct way to implement tests is to follow TDD, or Test Driven Development. This includes the important Test First theory of development. That means we first create a failing test, then find a way to make it pass.

Start by creating a failing test for a property called eight. I'll show two tests here, the first a slightly modified click nine test, and the second our new test:

Note that I have removed the debug lines from the renders button click for nine test, and added it to the renders initial button state.eight. I also removed it for the render initial value of paragraph with state.nine. This is because that paragraph element will no longer be the last() paragraph on our form. The last paragraph on our form is now the one that displays eight.state. (We will need to make similar changes for other properties we create.) 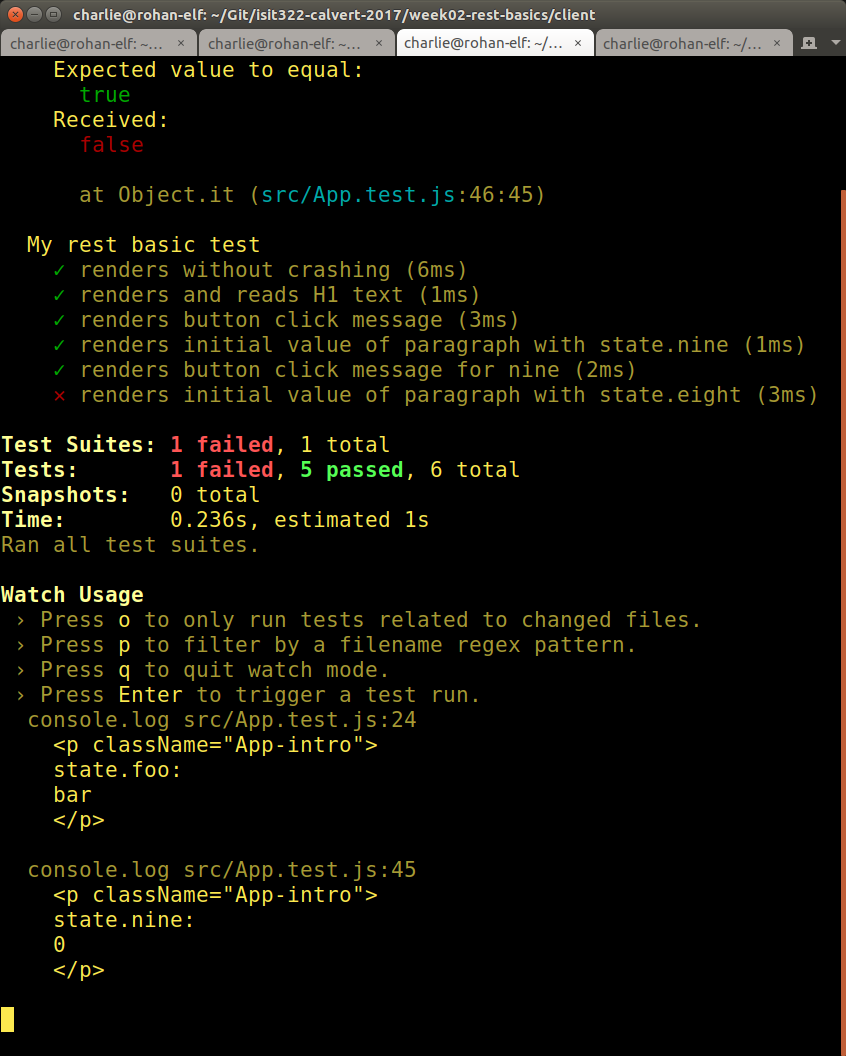 Note the failing test. Your goal is to get it pass. Start by adding state for the value eight:

The next step would be to add a paragraph in which to display its value. The result should look something like this at run time: 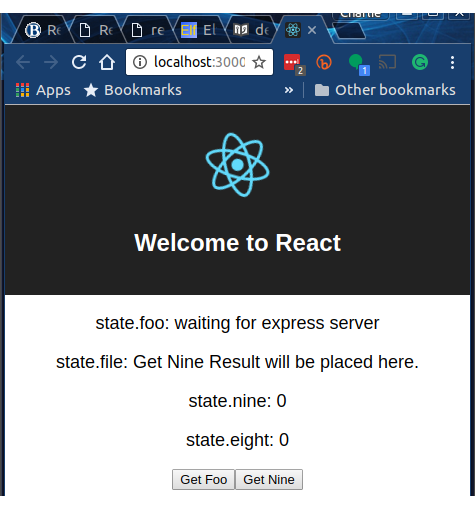 Now write a test to check that we can set a new value for state.eight. I'll leave that up to you, as it is really just a block copy of a previous test. Then replace certain obvious values.

To get the test to pass, add a button for updating and retrieving the value of state.eight. It should be fairly clear that you will also need a getEight method of your App component:

Go ahead and add state, tests and button for numbers 7-1. When you are done, save your work and push.

Frankly, I've totally lost track of which folder this should be in. Mine is in week02-rest-basics. Hopefully yours is in something similar. Probably the best course of action is to be sure to list the folder you want me to inspect when you turn the project in.

NOTE: One thing I'm trying to do here is create one project for each set of related assignments, rather than the old technique of "copy week02-react-foo into week03-react-bar. This is partially selfish, in that it makes my life simpler, but it should also make your life simpler. If you wanted to go crazy, you could use git tags or branches to delineate one assignment in a series from the next assignment in the series. But I will, when I can, just assume that if you can complete the second or third in a series of projects, then you also completed the first in the series.

I believe the key thing is learning how to see the output from our Components using the Enzyme debug methods. This class is designed to help you do this:

Let's step back a minute and try to understand what we are doing.

Once we have created a valid test, from that time forward, we should be able to say with confidence two things:

It takes time to create good tests, but once we have them, then we can improve, edit, and add new features to our code with confidence. If we keep our tests in memory at all times, and we check them frequently, then they will tell us immediately if something we wrote caused our code to break.

There are other reasons to write tests, such as documentation, but the above perhaps describes some of the obvious and tangible benefits.

Suppose you are on a QA team and some DEV pushes new code. You run your Unit tests, or if the tests are run automatically, and if the DEV made a mistake that broke old code, you would know immediately that it happened, and furthermore, you would know exactly where the error occurred.

I think if you know why you are writing the tests, and what you are looking for, it is easier to see how to construct them.